Penalties and loadings differ from overtime in that they normally apply on a day by day basis and are calculated without regard to the pattern of worked hours established by an employee over an entire pay period: 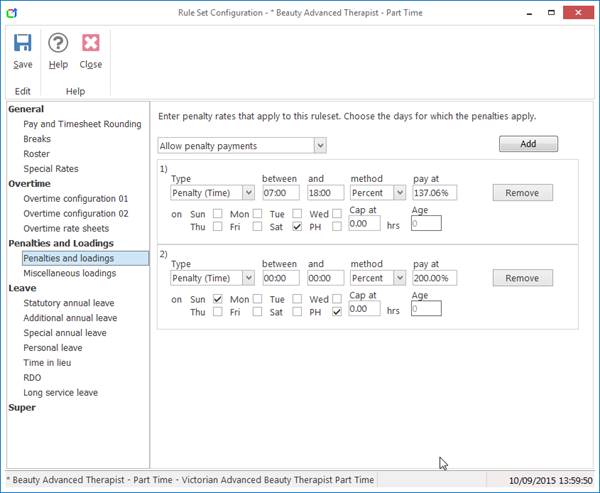 Shift penalties (or loadings) can be applied to the hours of shift workers who begin their shifts during specific periods in the day. Such workers are ordinarily referred to as early morning workers, morning workers, day workers, afternoon workers, evening workers or night workers.

Example, when an employee's shift begins between and 11 pm and 12 am on Monday through Friday, a shift penalty of time and three quarters will apply.

When an employee's shift begins between 10 pm and 12 am on Saturday, Sunday and Public Holidays, they will receive a shift loading of time and a half.

Penalties & Loadings Based on Specific Times of the Day

Penalties & Loadings Based on the Length of Hours Worked

Penalties & Loadings Based on Recall to Work (RTW)

Penalties and Loadings can be paid on time sheets that have the ’Recall to Work’ Special rate applied to them, meaning that an employee has been called back to work after finishing an earlier shift. If, for example, an employee has worked a morning shift and then is called back to work another shift, the role Recall to Work must be applied to that time sheet and penalties will apply.

Penalties & Loadings Based on Working an RDO

Penalties and Loadings can be applied to time sheets that are listed as worked on an RDO (rostered day off). If an employee has come to work on an RDO, the Administrator must set the role for the worked time sheet to RDO in order that the listed penalties can be applied.

This option allows employees to receive payments of standard penalties on public holiday leave entries on which days they normally would have worked.